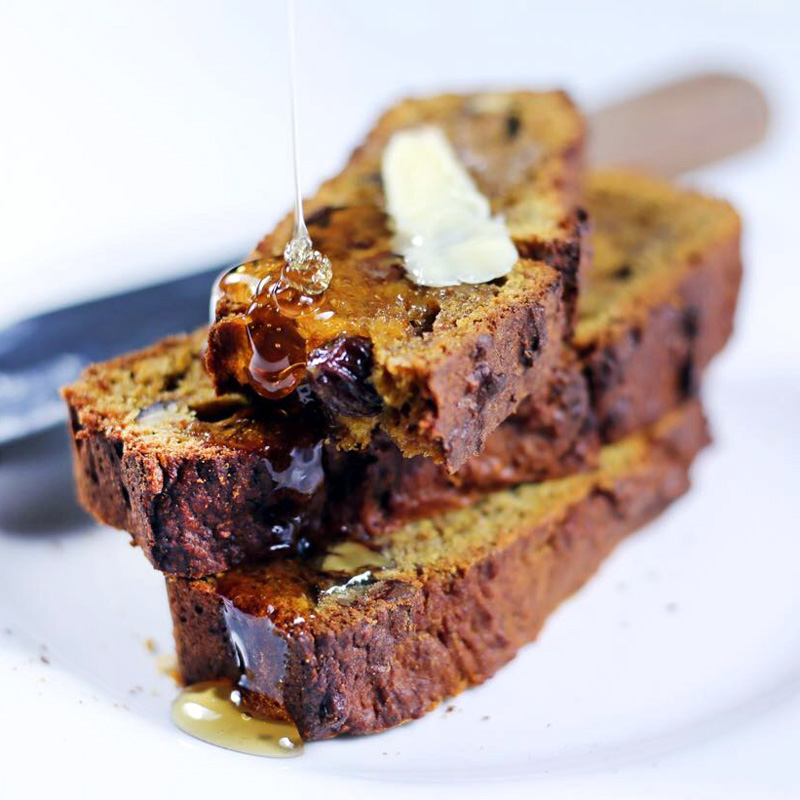 Don’t overlook the mighty pumpkin after Halloween! They’re in season in the UK until the end of the year, so there’s still time left to enjoy them. We recommend this lightly spiced pumpkin bread for your next baking session…

Stewed or roasted into soups and curries, baked into cakes, muffins and pancakes – pumpkins and squashes are so versatile. They’re also rich in all the good stuff – that bright orange flesh is an indication that they’re high in beta-carone – a powerful antioxidant, which is said to ward off all manner of illnesses.

You’ll need to add in an extra step before making this bread, in order to prepare the pumpkin puree, but we promise it’s easy and worth it. And you can use if for other things too (pumpkin waffles, anyone? We also hear it’s a great baby food). The best way to cook the pumpkin is to heat the oven to 200c, clean the skin, stab it a few times all over with a sharp knife, then bake it whole. It will take around 45-60 depending on the size of your pumpkin. You’ll know it’s ready when the skin is soft and slightly blistered, and you can pierce it easily. Leave it for about 20 minutes or so until it’s cool enough to handle, then cut it in half and scoop out the puree – you’ll get around 1-2 cups. Of course you can also do this step in advance and keep the puree in the fridge for a day or two.

Adapt this bake in the same you would banana bread – adding extra nuts (pecans, walnuts), raisins or dark chocolate chips.

Store… in a sealed container in a cool, dark place for 2-3 days, or in the fridge for 5-7 days. This also freezes well, in slices, for up to 3 months.

Don’t worry if you don’t have… nutmeg, allspice or vanilla. Just cinnamon will add enough spice and flavour by itself.

Swap… the honey for brown rice syrup or maple syrup.

Adapt… Don’t have pumpkin at home? Use a cup of ripe, mashed banana instead.

Avocado toast with chilli and lime

January 13, 2018
We'd love to know what you think of our ideas. Tell us if you’ve tried something you like, or if you found a great way of adapting one of our recipes. We also welcome questions, and suggestions for future posts. No challenge too big or small.